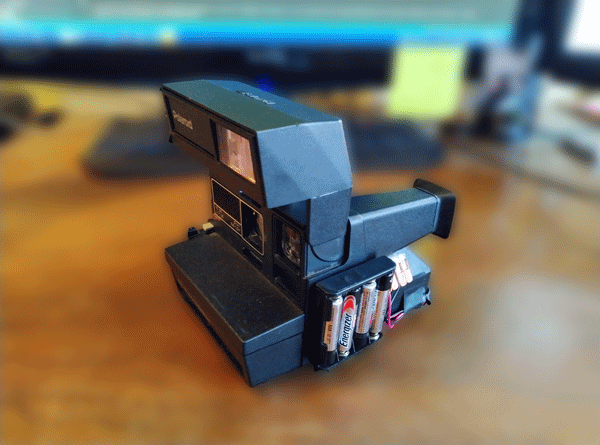 Over a year ago, my Polaroid 600 Business Edition started draining the batteries of film continuously, causing me to waste a lot of money on unused shots. I set it aside, planning to buy a replacement camera.

Since then, I’ve shopped around for a new camera, 600 or otherwise, but haven’t been able to settle on anything. The Polaroid 600 cameras on ebay are all either untested or expensive. Modern digital cameras are only in the high end due to phones. The new Polaroid cameras have weird bluetooth crap and require camera apps that will stop working in a few years. Fuji Instax cameras all seem to lack some particular something for me that I can’t express.

In the end, I really wanted something that would shoot itype but was otherwise identical to my broken business edition. I had heard that you can mod 600 cameras to add a battery pack for itype film. And I eventually found some instructions online for disassembly and modification. This hack would also, as a side effect, offer me a way to take pictures with 600 film packs with dead batteries. So even if I couldn’t figure out what was wrong with the flash, it wouldn’t matter.

This weekend I finally sat down and did it! It turned into quite the Frankenstein. I had to wait for my film pack to warm up. So I only just now took a test shot and… it works! 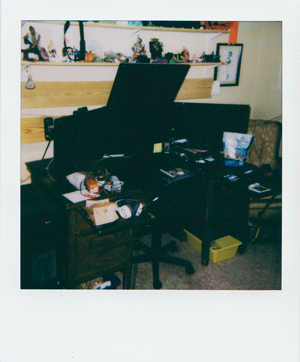 The light wasn’t good and I made no real attempt to fix that. Also I think there is some dust on my scanner… Anyway this came out great given the conditions! I’m really glad given how much time I spent on it!!

Disassembly took a whole day of work. Way harder than the videos and instructables made it look. I also probably took apart a few things I didn’t need to.

I mostly referenced this video from Toeps (by far the best!) and this ifixit teardown, but the original hack idea came from this article by Film Love Photography. Although that last was only inspiration and info on which lead was which. I would never recommend making your own wire insulation from electric tape or modding a single film pack lol… I instead added the battery pack to the camera itself so that any loaded film will work.

I’m bad at soldering, having had nearly no practice. So soldering the new lead wires, after cutting off the film battery contacts (in the camera not a film pack), took a long time.

I then tried to test the camera before reassembly. That did help me catch one mistake with the shutter mechanism, but it also took me down a long unnecessary debugging trail. Some things just don’t work properly until the case is on.

With testing, and some hard to arrange parts, reassembly took another day by itself, blowing up many of my other weekend plans.

I had originally planned to epoxy the battery pack on and more permanently cut and cover the wiring. At the last minute I decided to use a lot of double stick tape and electrical tape. That way I can undo it all and update it later.

At some point I need to go back and add a switch to cut the circuit. As it is now, I need to pop a battery out when I’m not using it.

Still, I’m really happy that I’ve finally gotten back to this camera. I’ve got some expired film to use and then I will be buying some itype film to try!

It was far too cold to go to the game this weekend. My dad and I watched it from home. It was a great win and a good showing after the late game collapse the week before. I hope it warms up so we can return to the stadium soon!

What time I didn’t spend on my camera or watching the Crew I spent on the Tactical Ops event in Halo Infinite. I was really hoping for something better from this one. With the playlist only varied from normal by weapon type it wasn’t too fun.

I’m a big fan of Instagib in all fps games. So this was something of a surprise to me. The pistol bloom was frustrating. The mangler melee focus and bullet travel really highlighted how bad the desync still is.

The worst though was the challenges. Tons and tons of leavers because of weapon specific challenges. And those leavers at the end of the weekend were all looking for manglers. That made mangler games hard to get because I was constantly replacing leavers in pistol games.

I finished Flag in Exile, having put it down halfway through several months ago. Following Honor Harrington around as she does what she does always makes for a gripping story. I probably wouldn’t have taken so long to finish except that I have the Honor Harrington series in ebook form only and I have a tendency to forget my ebook reader exists.

I continued reading Nobu (the manga). I’ve now purchased volume 8, which is the last volume my shop has. After this I will have to see if they can order the later volumes. It continues to be a nice relaxing ride.

Everything took a back seat this weekend for my camera and Halo. I’m pretty sad I haven’t done much mini stuff lately, but the sudden cold weather prevented me from even considering priming anything.

My music situation is actually in a great place right now! Not much to say there.

The cold makes my garage gym weights literally painful to hold, but, again, all the time with my camera kind of pushed that out anyway.

I’m feeling good going into this coming week. Make some time for yourself to do something you’ve been putting off but really want to do! It will be worth it. Even if you fail that’s still a step that needs to happen for you to progress.