The long weekend stretched into a long week. I wrote about half of this a week ago but never finished. Changes to my routine, even good ones like an extra day off, always seem to mess me up. My sleep schedule is no longer a schedule at all.

My mom went out of town on vacation this week. So I walked one of her dogs, Lily, for a few days. She’s a bit afraid of everything, and a lot afraid of me, but I managed to get her to walk for me! I carried her out of sight of the house and set her down. That’s where she walks. So she walked. I think, by the end of the 4 days, she had actually started to respect me.

Also, my favorite lunch place by my office closed permanently. So lots of routine changes. Despite all that I managed to do a lot of things! 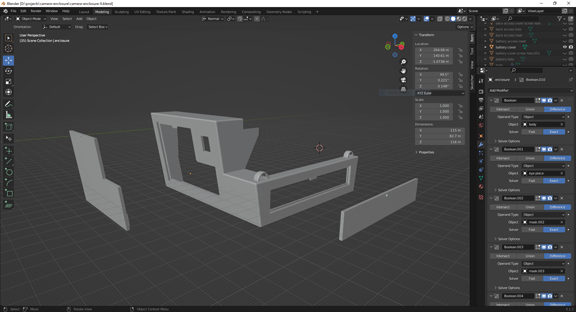 I started work on an enclosure for the mods I made to my Polaroid camera back in March. I created a first draft model in Blender with some assistance from CAD Sketcher. A continuation of the workflow I started learning a few weeks ago. CAD Sketcher was less helpful this time and I had to freehand a lot.

I printed the first iteration of the model today. With my old printer, it took 8 hours. Unfortunately, the print separated from the build plate at 90% completion. It also had some hidden issues on the first layer and some early separation on one corner. 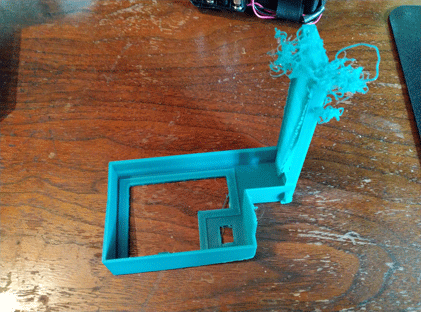 Still, enough of it was done for me to do a test fit and see how well it works. 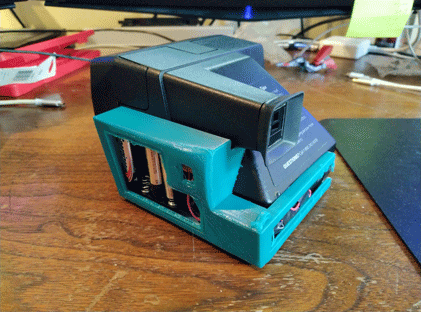 And it fits surprisingly well! The battery door is unfortunately not big enough. So I can’t get one of the batteries out. Also, I failed to notice that the back of the camera is not at a perfect 90 degree angle with the side. So the rear cover doesn’t line up right. There are 2 or 3 gaps that should be filled in as well. Still, I’m pretty happen with how well it fits!

Hopefully I will be able to return to this and modify or recreate the model with these changes in mind. I just need to figure out how to account for the changes and still end up with a model that will fit in my printer’s build volume. This is close to being as large as I can print.

The other thing to deal with is the printer itself. I think I need to run through some maintenance tasks on it - clean it, grease the parts that need greasing, etc. I may also need to switch to some newer filament for the next print. This filament is pretty old.

As predicted in a couple of past weekly posts my interest in Destiny is waning. That isn’t to say that the new season isn’t good - it is. However, I’ve finished everything I wanted to do. The new season just isn’t good enough to renew that interest. And the meta shake up has removed some of what I liked as well.

My best friend and I finished the Shadowkeep campaign today! That was the last item on my Destiny 2 bucket list. I’m very satisfied. I may still play some bits and pieces here and there after that, but the urgency just isn’t there for me anymore.

With a gap to fill from Destiny, I returned to my playthrough of Unpacking on Gamepass. It turns out I stopped on the last level, which is somewhat typical of me. I’m so glad I went back and finished it.

Unpacking unveils a marvelous story purely through showing rather than telling. It is almost uncomfortably intimate and helps personalize the feelings of the main character for the player, without ever even showing them on screen. I highly recommend this one.

I’ve started Paradise Killer, a game which I’ve considered playing for a long time because the soundtrack is absolutely amazing. The game is on Gamepass now. So I have no excuses not to give it a try.

So far (I’m less than an hour in) the feel is really nice. I like the aesthetics and the crazy world building. The soundtrack matches the game really well. I might like to see real 3D renders of the characters in-world rather than the carboard standees. The currency pickups pop you into the flavor text screen every time, that maybe should just be once. Still though, those are pretty minor compared to how fun the game has been so far!

I caught up completely on the US English release of Ascendance of a Bookworm which I’ve been noting progress on here. It remains as good and comfy as ever.

I bought William Gibson’s Agency only to find that I had already read it. Turns out this was the very last book I got from the library before the pandemic hit.

The NPCs in this Village Sim Game Must Be Real!

I read both volume 2 and volume 3 of The NPCs in this Village Sim Game Must Be Real!. It looks like this was a planned trilogy. So that may be all there is. I really loved it! The main character’s growth starting as a NEET to the end was very well done. I feel like it was a good push for me to get going with some of my projects rather than just sitting around.

The Crew won their away game at Atlanta. A very welcome change after a very frustrating May. I had fun watching from home with my parents.

“If we did all the things we are capable of, we would literally astound ourselves.” – Thomas A Edison

I came across this quote in one of the books or blogs I’ve read in the past month. Coupled with everything I’ve been reading lately, whether it is the light novels above, the works of Becky Chambers, or thejaymo’s blog, I feel that the call to action is clear: We each should work to be intentional with our lives.

So that’s what I’m trying to do. I’m not succeeding a lot, maybe even not most of the time. But I am trying, and I can feel the muscles to do so strengthening. As I wrote last time: Put in the extra effort to do the thing you really want to do instead of the thing that’s easy. And as always